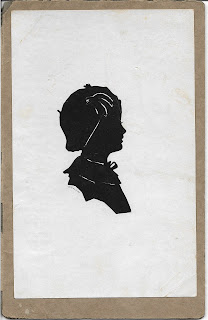 The 1910 US Census records my grandmother as Dollie.  You will remember that last week I shared a photo of her driver's license & her name was spelled Dolly.  Some would say this is bad record keeping, but things get weirder, as you will soon see.  This record lists her father as William & her mother as Mary.  They were both from California, according to this document.  It also lists her brother Lawrence & sister Illa.  There is also an Ora listed as "mother."  It does not specify whether this was William's mother or Mary's mother.  Time will reveal the answer to that question. 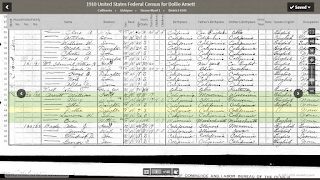 The 1920 US Census again lists William & Mary, but this time my grandmother's name is spelled Dolly.  It also shows that she had two brothers, Lawrence & David.  At first, I wondered what happened to Illa because I know she lived much longer.  I went back to the 1910 census & noticed that Illa had been 13 then, so she was 23 in 1920 & apparently not living with her parents any longer.  The 1930 census, which I shared last week, showed Grandma Dolly married to Cyrus Titus.  The 1940 Census, also in last week's post, revealed that Cyrus had died & my grandmother was a widow. 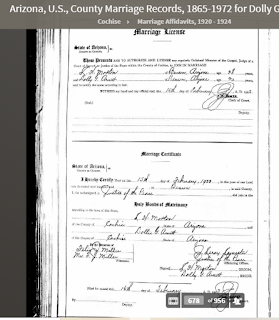 I found a record from Arizona that records the marriage of LH Morton & Dollie Arnett.  This marriage took place in Benson, Arizona- Cochise County- on February 15, 1923.  Then it got weird (as if it wasn't already). 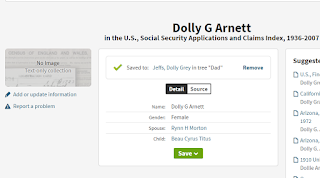 The US Social Security Applications & Claims Index of 1936-2007 shows that my grandmother was married to Rynn H Morton & that they had a child named Beau Cyrus Titus.  Okay- so what is really going on here?  Who in the world is Rynn???  Even if this was poor record keeping or a typo, information I shared last week shows that my grandmother had divorced Lynn/Lenny in 1928.  AND she evidently did some changing of my dad's name when she was married to Cyrus, but that still does not explain how she was with Rynn/Lynn/Lenny after she had divorced him & married Cyrus & become a widow when Cyrus died.

Okay- take a breath LOL.  We will continue this merry go round next week.