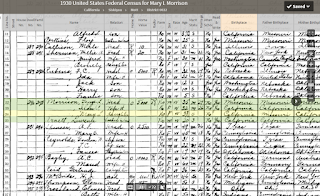 Mary Lee Morrison was apparently born to Georgie Porgie & Ilau/Ila/Illa on December 11, 1926.  I say apparently because...well...you know.  The 1930 US Census records show that George was from Missouri and owned a grocery store.  It records Ilau as being from California.  Well, at least that is consistent.  Mary is recorded as being just over 3 years old. 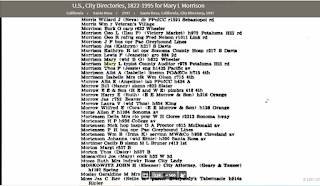 A 1947 Santa Rosa, California, directory reveals that Mary was a typist.

On March 7, 1947, the Dunsmuir Newspaper printed an announcement saying that she was going to marry Kenneth Ouimet.

Then, on March 22, 1947, the Santa Rosa Republican Newspaper published a statement informing the public of their marriage license. 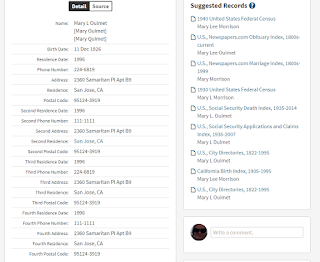 One public record indicates that Mary moved around Santa Rosa quite a bit. 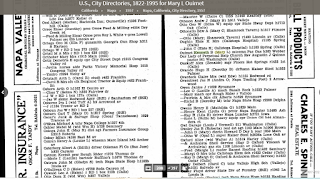 However, a 1957 Napa, California, directory shows that they had left Santa Rosa.

Social Security records state that Mary was living in San Jose when she died on August 22, 1999.
It would be nice to have a picture of Mary, but I am enjoying getting to know my ancestors- even if it is only a little bit for now.