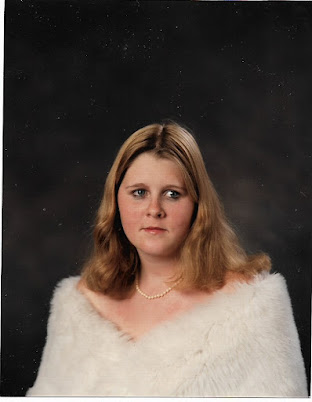 What was she doing here? She looked around the room. How could she have let it get to this point? Here she was, three months pregnant and marrying him. She didn’t go to church, so she was being married by the Justice of the Peace—at the house where she got pregnant. She didn’t even get to wear what she wanted for her wedding day because his relatives kept calling her and telling her to wear something else. What in the world was she doing?

He hadn’t even taken the time to buy her an engagement ring, not really. He bought one from his cousin for forty dollars, a used one. The transaction had taken place in the kitchen at his aunt’s house while she was sitting in the living room.

She looked around again, flowers in hand. Her uncle would be coming in soon to get her and walk her down the aisle. What aisle? Who was she kidding? It was a yard, and an ugly yard at that. Her dad had stopped talking to her when she told him that she was going to marry this man. Man?! What Man?! He didn’t even have a job. He had quit the job he had when they first got together. Now, here she was marrying someone she didn’t even love and her dad wouldn’t talk to her. So, she was left with having her uncle walk down the aisle. Not that she didn’t want her uncle to do the honors. She just wanted her dad. Honors. Ha! There were no honors here.

She didn’t even love him. She was marrying him because she felt she should be married to the father of her child. She nervously looked around again. What should she do? She knew she should not go through with this. The front door caught her eye. She could leave through that door. Then when her uncle came to get her she would not be here. They would look for her for a few minutes, but when they couldn’t find her they would figure it out.

She started to move. Just then her uncle came through the back door and asked her if she was ready. Why did he have to come in right now? Why couldn’t he have waited just one more minute? She looked around one last time. Maybe she should tell him that she had to go to the bathroom. After all, pregnant women always had to go to the bathroom. Didn’t they? This was her first child, so she could not be sure. No, just get it over with.

She turned and smiled at him. She walked over to the door. They stepped out on the porch. She put her arm through his. They started walking towards him. What in the world was she doing? Her head was spinning. She wasn’t even sure she knew where she was. They walked closer… closer… closer. Maybe she should say something. They reached the corner of the yard near the street, where he was waiting.

She stood there pondering over the situation and the things that had happened over the past few months. She did not hear what the Justice of the Peace was saying. What was she doing here? Maybe she should say something.

“I now pronounce you man and wife.”