What Rabbits Eat, Why They Dig - And Other Handy Things To Know Before Getting A Bunny

A lot of people think bunnies are cute and cuddly, and that they are.  But there are some pretty important things that a person needs to know before getting one.  Something that is really important to understand is they need ample space.  That may seem odd to some people, but bunnies love to run and hop.  They do not like being all cooped up anymore that we do.
Bunnies are characters
Bunnies also have very unique little personalities.  Some will like to sleep a lot.  Others like to have lots of toys.  One thing I noticed about my last three bunnies was they all loved to look at the water.  Any time I took the previous two that I had near the ocean they seemed mesmerized by it.  Kevin is the same way.  He loves looking at large bodies of water.  They also tend to throw tantrums- especially if you spoil them like I do.  One time, the bunny I had before Kevin did just that.  He wanted more hay & I wouldn't give him anymore so he picked up his water dish & threw it across the cage. Bunnies also experience a large array of feelings.  You can tell a lot about how a bunny is feeling just by watching what it is doing.  When a bunny sits with its ears up and outward, that generally means it feels happy and safe.  The same thing can be determined when a bunny lies in what is often called the "loaf" position.  This is when a rabbit is lying all curled up on its tummy with its paws close together & its ears resting on its back.  When a bunny lies like this, it feels extremely safe and relaxed.
What does ear position and nose twitching mean?
Rabbits have a lot of predators & rely on their ears to assess the safety of their environment.  Quite often, bunnies have their ears up and twitching to take in as much information as they can in order to stay safe.  At times, they have one ear up & one ear down.  In this case, they are paying a measure of attention to the sounds around them but they are not on high alert. 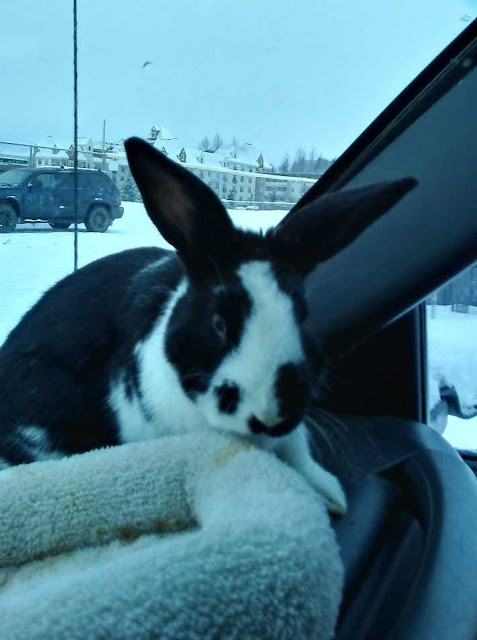 Bunnies rely heavily on their noses too for the same reasons.  They are constantly taking in information about the scents in the air.  I have had people ask me why Kevin was twitching his nose because they thought maybe he was upset or there was something wrong.  The fact is that bunnies are twitching their noses almost all of the time.  Not only does it help them breathe, but they are constantly checking out the scents in the air.  Plus, they twitch their noses when they are being inquisitive about something.
What are their sleeping habits?
I mentioned that bunnies will sometimes go into the loaf position.  They can be quite cute when they do this.  Another cute and funny way they sleep is the flop.  They literally just throw themselves over on their sides.  It is pretty amusing to watch, and they tend to do it quite frequently when they feel they are in a safe environment.  Since they are at risk of many predators in the wild, they tend to sleep with their eyes open.
While rabbits have sporadic sleeping habits, they tend to sleep when it is dark just like we do.  I have noticed that Kevin will play for a little while & then settle down & take a little cat nap.  These rest periods rarely last for more than a couple of minutes before he is up playing again.  Each bunny is different and you just have to be observant and get used to your particular bunny's habits.
But what do they eat?
There are a wide variety of foods that can be bought at pet stores.  You cannot just pick one and think it is going to work for your bunbun.  Just like humans, rabbits have different preferences.  Some really love pellets- others not so much.  For instance, Kevin thinks he's a bird.  I have tried several different types of rabbit food.  He is okay with certain brands of pellets, but he likes a variety.  I also noticed that when I bought rabbit food that had bird seed in it he really chowed down on the seed and refused to eat some of the other things in the bag.
He is also picky about which types of sunflower seeds he will consume.  He will eat hay sometimes, but again, it's not his favorite.  One things he really likes are rice pops.  He also loves fruits and vegetables, but only if he can have a variety.  If I try to give him the same thing all of the time he stops eating it.  You have to be careful  how much of any type of food you give a bunny.  Just like humans, too much candy is not good for them.  It is also extremely important to make sure they always have plenty of fresh water.
And with eating, soon comes...
Rabbits can be trained to use a litter box.  It is actually quite easy to train a rabbit.  I had a rabbit about 15 years ago that actually did it himself.  I made him a little bed with some nesting material in a little box and he used it for a toilet.  Bunny pee can be very acidic.  If it gets on the wrong type of fabric or wood it can be difficult to remove.  Vinegar can be a good agent to use to remove the urine and the smell.  I typically use vinegar & baking soda to clean Kevin's catch pan & then rinse it with water. 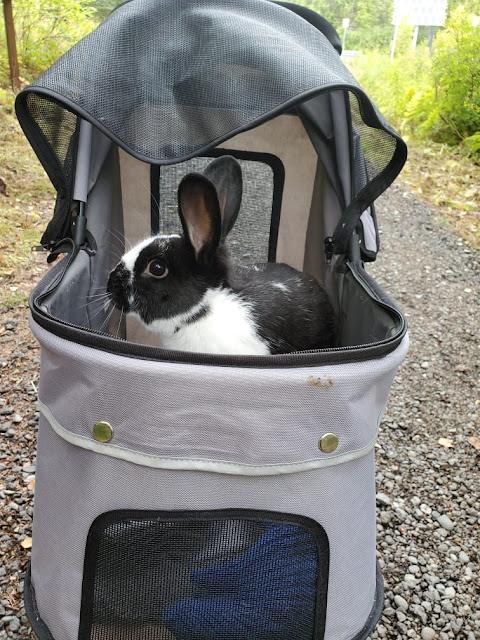 Sometimes, rabbits will urinate on their owners.  This can happen if they are not trained yet.  Rabbits also mark their territory, so your bunny may be claiming you as theirs when they do this.  It may also happen if a bunny is scared.  My last bunny did this to me.  I was holding him & introducing him to my friend's dog.  The little pup licked my bunny on the nose & my bunny freaked, peeing all over me & the floor.
Bunnies also tend to poop a lot... a LOT.  Some people think that rabbits eat their poop.  What they are actually eating are cecotropes.  They are rich in nutrients & help rabbits to have a healthy diet.  Just a little side note- bunny poop is the second best fertilizer you can find.  This is because bunnies typically eat a lot of plant based foods with a lot of fiber.  The best fertilizer is bat poop.
How do I make sure my bunny is happy?
Bunnies like a lot of attention.  Other animal companions can make for a happy bunny.  It is important to acclimate the pet pals gradually though.  I feel it is probably best to raise two animals together from an early age.  Some have been successful in bringing older animals together, but caution needs to be exercised before leaving the pet pals on their own unsupervised.
Bunnies get bored easily and like to have active lives.  Kevin has a harness, stroller, and car seat.  The more experiences you can give your bunny the better.  My last bunny rode on my dashboard from California to Nebraska twice.  He loved dash surfing.  Kevin prefers his car seat.  He also loves going to the dog park.  Bunnies can be a lot of fun if you know how to care for them properly.
Rabbits love to dig.  This is mainly instinct since they live in underground dens in the wild.  Digging also helps them to groom their nails, which would grow extremely long if they did not have a way to wear them down.  If your bunny spends most of its time inside, there are toys you can get for your fur baby to help it keep its claws at an appropriate length.  It is also very important to give your bunny lots of chew toys.  They love to chew and their teeth continually grow as well, so they need a way to wear their teeth down.
There is a lot more to know about bunnies, why they act in certain ways, and how to best care for them.  I inserted lots of links to help you find additional information easily.  I hope this has been helpful for you.  Enjoy your bunny!